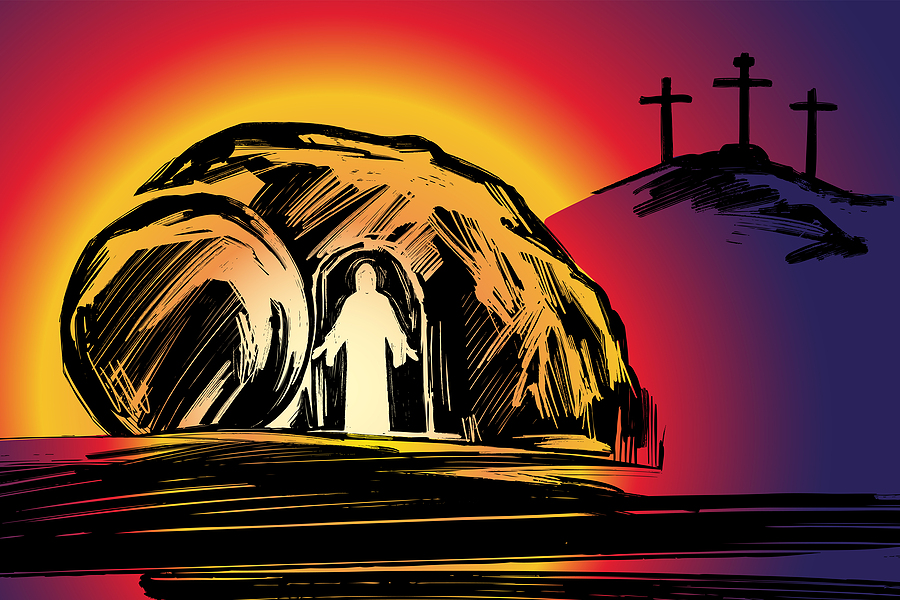 Like I said last week, I like happy endings. Rags to riches. Girl meets boy. Hero takes down villain. That’s what makes Easter such an amazing celebration. Inside the Easter story is the promise of hope and life–and POWER! And I don’t know any family right now who couldn’t use that message of power and hope.

Use this true story of Jesus & the Spirit’s Power to share that message of hope with your kids.

Kids learn best when they not only hear but do and see, so use the props to tell the story as you go.

The Story of Jesus & the Spirit’s Power

Only criminals died on a cross. A cross-death meant shame and embarrassment. One man wasn’t afraid of the shame of Jesus’s death; he didn’t care if people knew he was a follower of Jesus.

Pilate, the governor, sent out orders: “Make the tomb as secure as you know how.”

Soldiers attached the Roman Imperial seal to the outside of the tomb. Breaking that seal would bring down the governor’s anger. No one had the authority to open the tomb. Roman soldiers stood guard in front of the tomb. No robbers or wild animals would have the power to break in. And of course, no one had the power to come out.

At least that’s what everyone thought.

On the first day of the week, three women went to the tomb. They took spices to anoint Jesus’s body, a sign of respect.

Suddenly a powerful violent earthquake rocked the land. The ground rumbled. Guards shook. A flash of lightening seemed to streak down from the sky. An angel appeared shimmering white like snow. With mighty strength, he rolled the stone away from the tomb. The guard were so afraid their knees knocked together. They couldn’t move; they couldn’t speak.

“Don’t be afraid,” the angel said to the women. “I know you’re looking for Jesus, who was crucified. He isn’t here. He has risen, just like he said. Quick! Go tell his disciples!”

They rushed away afraid, happy, and not sure what to think except this—Jesus who was dead and buried was now alive!

Jesus’s DEATH broke the power of the curse that sin had brought into the world. But Jesus’s LIFE gave power and hope that life could be brand new.

What does this mean for YOU?

When you believe in Jesus and are baptized that means…

When Jesus died, you died to the old way of acting and thinking. You don’t have to live like that anymore.

When Jesus was buried, you were buried, far from the wrong things you used to say and do.

When Jesus came to life, you were raised to a totally brand-new life, a new way of thinking and acting.

The same Holy Spirit that raised Jesus from the dead, gave you new life (Ephesians 1:19-20). He lives inside you and gives you his power to live with joy, peace, patience, kindness, goodness, gentleness, faithfulness and self-control (Galatians 5:22-23).

SEPARATE from God’s Spirit, you can’t do any of this (John 15:3-5). WITH his Spirit power inside you, you can live like Jesus!