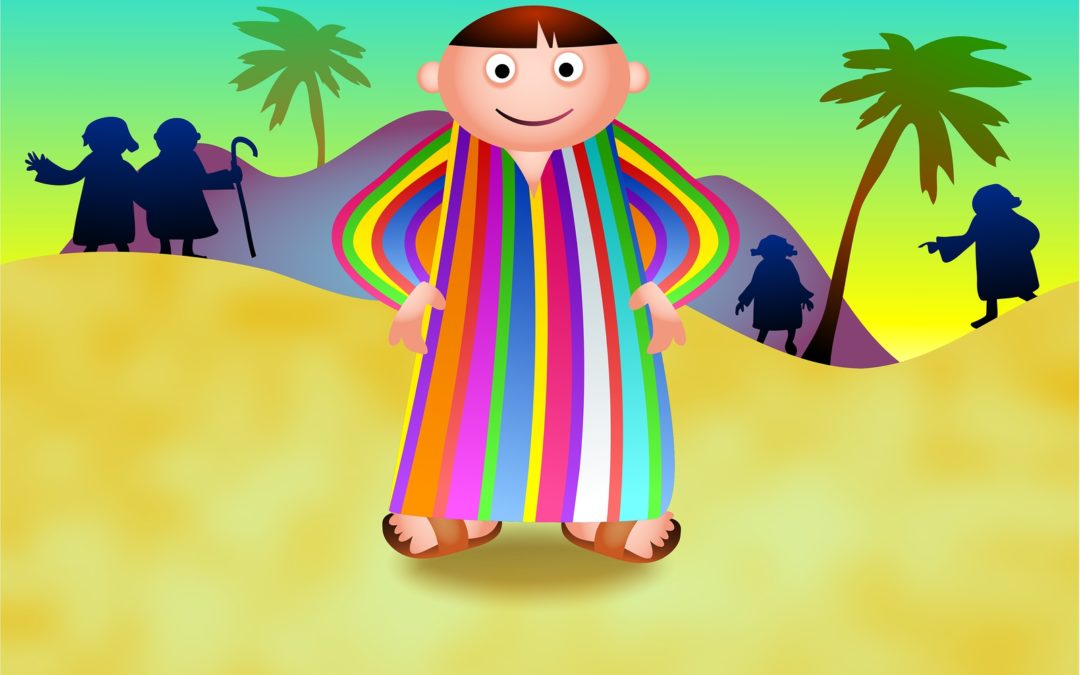 The Lord was with Joseph.

Bible stories usually fall into two categories. Those we avoid telling our kids because we’re afraid of all the questions they’ll raise. After all, how do you explain Samson’s tryst with Delilah or Abraham’s almost-sacrifice of Isaac?

Then there are Bible stories that have been told so many times they’ve lost their wow factor. Familiarity replaces novelty and in the process the power of God’s Word is reduced to a bedtime story, a coloring page, or a craft.

I love that God’s Word is packed with fresh insight into everyday life! That’s an amazing privilege we have as parents–helping our kids discover who God is and how he relates to them. So I wanted to give you a different take on a familiar story–Joseph. In order to do that…mentally set aside Joseph’s coat. Yes, Jacob gave his son Joseph a beautiful coat and his jealous brothers took it away and it’s the focus of most lessons. That’s not the case here.

Start with a “hook”, an attention-getter

Choose one of the following based on the age of your kids. You can do it or have them do it.

(While you, or they, do the above, keep saying, “This is really hard. This is so difficult.”)

standing outside in the cold to get catch the school bus

being patience with your older sister

finishing your homework when you’d rather be out playing soccer

being in the hospital.

Tell the story and keep repeating the theme

In God’s Word, the Bible, a teenager named Joseph knew what it was to go through hard things. Many hard things happened to Joseph.

Joseph’s brothers didn’t like Joseph very much. In fact, they hated Joseph. They stole his brand new coat. They threw him in a big hole in the ground. The hole was deep, dark and cold.

It was hard being in a hole in the ground.

The brothers pulled him out of the hole, but then they tied him up and sold him as a slave. Slave traders took Joseph far from his home, his dad and mom, his home, and everything he knew to be a slave in Egypt.

It was hard being a slave. People didn’t treat him very well.

Even though he didn’t like being a slave, Joseph worked hard for his master. He did his best. Just when things seemed to be going better, someone told a lie about Joseph and his master threw him into prison. Poor Joseph!

It was hard being in prison.

Joseph worked hard in prison. He helped two other prisoners. One of them got out of jail. Joseph said, “Please tell Pharaoh, the king of Egypt, to let me out of jail too.” But the man forgot.

It was hard being forgotten.

Show them how it applies to their life

Joseph was in jail for two more years before his life changed. He went through a lot of hard times. Still, God was with Joseph.

You might go through hard things too. But guess what? Don’t give up. Keep believing God. God is with you and he loves you.

Sometimes we think that when hard things happen, God isn’t with us. After all, we think, if he were, why would tough things be happening? But God is with us, when good things happen, when bad things happen. His presence is real and powerful and good and loving.

Has anything ever hard happened to you?

How can you know that God is still with you?

I’d love to hear the comments and questions your kids come up with after you tell them the story of Joseph.