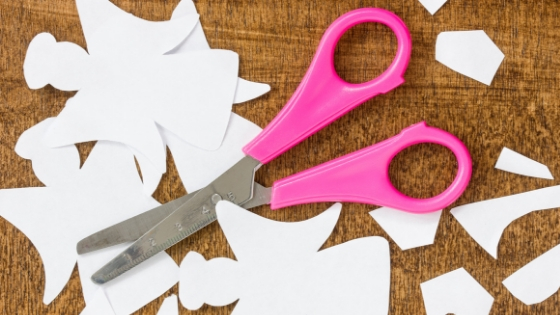 Telling a story to kids is so much easier when you’re doing something that keeps them engaged. “What are you doing?” they’ll ask. Their curiosity is what holds their interest.

So insert these three paper chains into the story below to hold your child’s attention and emphasize the key points of the Easter story.

FIRST – Create the paper chain designs. Just don’t cut them out yet.

NEXT– Tell the story below, cutting the shapes as you talk.

Don’t cut the folded ends since that’s what keeps the chain together. If you’d rather read the story than tell it, pause along the way to cut out the designated shapes.

A group of women watched Jesus as he hung from the cross. They began to cry.
Soldiers had taken Jesus and…
whipped him,
spit on him,
made fun of him,
and pressed a prickly crown of thrones on his head.

Then they nailed Him to a cross and left Him there to die.

[Cut around the cross design and unfold the chain of crosses.]

“Father,” Jesus prayed, “forgive them because they don’t understand what they’re doing.” Later he said, “It is finished!” and he died.

Friends took down Jesus’ body from the cross and wrapped it in a clean cloth. They “buried” him in a tomb.

A huge stone was rolled over the entrance of the tomb. Soldiers stood guard on either side so that no one could take away the body of Jesus.

[Cut around the stone design and unfold the chain of stones.]

One day passed.
Two days passed.
On the third day, the group of women went to the tomb. Suddenly, there was a strong earthquake. An angel of the Lord came down from heaven and rolled back the stone and sat on it.

[Cut around the angel design and unfold the chain of angels.]

The angel shone like lightning, and his clothes were white as snow. The guards were so afraid that they shook.

The angel said to the women, “Don’t be afraid. I know you are looking for Jesus, but He isn’t here. He has risen, just as he said. Come and see the place where he lay. Now, quick, go tell his disciples: ‘He has risen from the dead.’”

The women hurried away from the tomb and ran to tell the disciples, but who did they see but Jesus!

They women ran back and told Jesus’ disciples, “We saw him! We saw him! Jesus is alive!”

One day Jesus went up to heaven right before their eyes! Up, up, up they watched Him go into the clouds.

[Cut around the cloud design and unfold the chain of clouds.]

Suddenly two men dressed in white appeared. “Why are you looking up into the sky? Jesus will come back again. He will come back the same way he left.”

ASK – How would things be different if Jesus hadn’t risen from the dead?